Lehi City is funded primarily through two categories of revenue: taxes and fees. Tax revenue is primarily used to pay for services provided to the public in general such as police, fire, streets, and parks. The City also provides services that benefit specific groups of citizens for which a specific fee is charged, which is intended to pay for all or part of the costs incurred to provide that service. The City adheres to the following revenue policies: 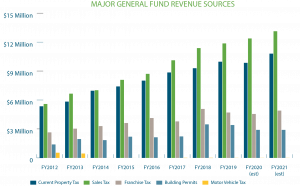 The above chart shows the ten-year trend for those revenue sources classified as general taxes and as building permit fees. In total, these five sources are expected to comprise approximately 77% of the General Fund revenue. It is important to maintain balance among major revenue sources. The remainder of this webpage will provide additional information on the major general fund revenue sources used to fund the City’s general government services. User fee revenue information can be found by clicking here. User fees are based on an analysis of how much of the cost should be covered by the fee versus how much should be subsidized by general taxes and revenue. Factors considered in the analysis include:

General sales tax is one of Lehi City’s largest revenue sources at just over 30% of General Fund revenue for FY 2021. State law authorizes cities to receive sales tax revenue based on the process described in the chart shown below. Normally, sales tax revenue fluctuates more with the economy than the other major tax revenue sources. However, commercial growth has continued to hold steady with the addition of Class A office space and several commercial developments. 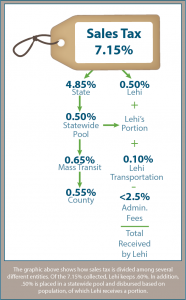 Property tax is another one of Lehi City’s largest sources of tax revenue, accounting for about 25% of General Fund revenue. In Fiscal year 2014, Lehi’s Finance Department started combining current property taxes, motor vehicle taxes, and delinquent taxes into one property tax line item. This accounts for the increase in the property tax revenue line item from previous budgets. Utah County assesses the taxable value of property in Lehi and collects property tax. Lehi City’s FY 2021 certified property tax rate is 0.001451. Primary residences are taxed at 55% of the assessed value while secondary residences are taxed at 100% of the assessed value. Lehi City receives approximately 15% of what Lehi residents pay in property taxes (see graph below). 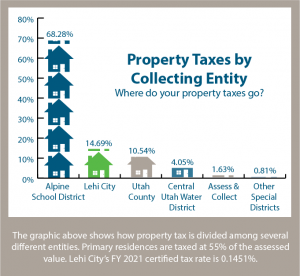 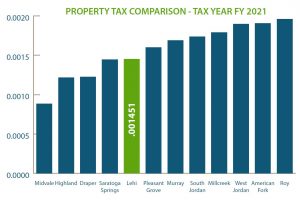 Franchise taxes are the third largest source of revenue for the general fund, accounting for approximately 11% of total General Fund revenues. State law authorizes cities to collect up to 6% in utilities operating within city boundaries.

A statewide fee is assessed on motor vehicles in lieu of property taxes. The fee is assessed based on the age of the vehicle. Historically, this source of revenue accounted for just under 3% of all General Fund revenues. Lehi’s Finance Department now tracks motor vehicle tax revenue with property tax and delinquent taxes under one line item. A breakdown of how the Motor Vehicle Tax is assessed is provided below: 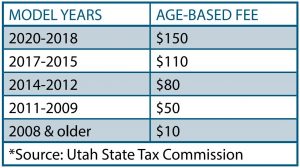