Brian and Wanda met at a dance in Washington when they were just 16 years old. Brian knew immediately that Wanda was someone with whom he wanted to spend his life. Five years later the couple married. They have been married for thirty years and have three children, Elissa, Megan, and Jacob. Five months ago, the couple also became grandparents to their first grandbaby, Blake. While the couple has been blessed with three children they have also experienced grief, as the family has suffered from four miscarriages through the years.

The Sumps have several traditions and activities that they enjoy doing together. The family does a service project every Christmas. One of those service projects include making over 150 hats for children in hospitals. During New Year’s, they pick a new country to learn about and they decorate, eat food, and play games from that country. The Sumps also do their best to find creative and fun ways to make new traditions and to teach the children about service.

The Sumps wanted to ensure 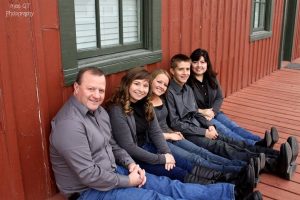 that their children were raised to work hard and know the importance of service. From the time the children were little, Brian would take the children out to help work on real estate that they owned. In the past, the whole family went out to fill sandbags for those in need during flooding in Lehi.

When the Sumps moved from Washington to Lehi in 1995, neither of the two were particularly fond of the idea of moving to Utah. However, their Utah-based family had other plans. Their family helped line up a job and house for the couple and then asked them to consider moving to Utah. As the couple investigated the possibility, they both realized that this was where they needed to be. The Sumps felt that Lehi was a great place to live with several opportunities to serve in the community. Since that time, they have served in several different areas of Lehi. Wanda has worked with the Lehi Arts Council, the Literacy Center, and seniors. She has also been the president of the Quilters Guild. Brian serves with the CERT Rehab team, VIPS, Lehi Round-Up rodeo, and the Utah County Sheriff office. Most notably, the Sumps have been serving on the Lehi CERT team since 2009 where Brian currently serves as the Lehi CERT Coordinator.

The Sumps family diligently raised their family to appreciate service and hard work. The advice they would give to those who are raising a family is to make sure to teach them basic life skills and the value of work. They also remind us to teach our children the principles that we want in our homes or they will be taught something else by someone else.

The Sumps have been a great asset to our community and we are honored to have them as one of this year’s “Outstanding Families” for Lehi Family Week.