Lara and Shane Bangerter have been married for 27 years. They met during college. Lara went to BYU and Shane was going to UVSC, and they both went to the BYU library to use the computer. When they sat next to each other, they started talking and felt a connection. Coincidentally, a week later, they met again and after more conversation, they decided to go out and get to know each other better. They have four children Stephanie (married to Brandon Thomas), Rebecca, Catherine, and Sophia. Stephanie and Brandon live in Logan and Rebecca just recently returned from a mission to Brazil for their church. Both Rebecca and Catherine are attending BYU-Idaho, and Sophia is attending Skyridge. 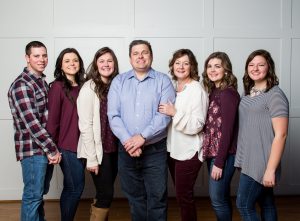 Valentine’s Day. Part of the fun is watching as everyone attempts to eat spaghetti and meat sauce with whichever utensils were chosen. The family also loves to travel and often save so that they can take big family trips together. They have been to Hawaii, New York City, and South Carolina. The Bangerters have even had the opportunity to take each of the children on their own individual trip.

Shane grew up in Alpine and Lara grew up in Grand Junction, Colorado. Lehi wasn’t their first choice to live, but then Lara found the home that she liked. As she drove to the home, she felt that this was right and where she needed to be. The Bangerters have served in several capacities in Lehi including in the school district and in the community. Currently, Lara is the Director for the Historical Society and Archives where she has served for the past two years. Under Lara’s leadership, the Historical Society has been awarded a grant to digitalize past issues of the Lehi Free Press. Lara and Shane have also passed their love of service in the community to their children. Catherine and Sophia have both served with the Lehi Youth Council and Catherine has even served as the Youth Council Mayor.

The Bangerters say that the most rewarding thing about parenting is being able to watch their children grow up to become productive and kind adults. The Bangerter family motto is, “Enjoy it!” Lara feels that this is the best advice she can give to those who are raising families. Just relax and enjoy it and don’t be so stressed about the little things they are doing; just enjoy watching your children grow. One day they’ll be leaving and then you’ll be sad but can still rejoice.