This article was featured in the Lehi Free Press by Autumn Cook. To read the full story visit www.lehifreepress.com

What does it take to live for 100 years? If you ask Lehi resident Mary Alexander, she will tell you, “Take care of your body, exercise, eat good food, be happy. I think your attitude is so important.” And she would know – she will turn 100 years old on Sunday, September 8.

Her warm and energetic smile, cheerful eyes, and habit of walking “all the time,” as her friend Heather Miller puts it, are clear indicators that she has taken her own advice. “As long as I’m alive I want to keep moving,” says Alexander.

Born in Lethbridge, Canada in 1919 and raised in nearby Stirling, she was the oldest of four siblings. She was also “the shortest and smallest,” she says with a laugh. Her brother was well over a foot taller than she.

Alexander’s mother wanted her to become a stenographer, so she began her college education at Brig 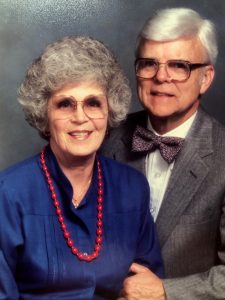 ham Young University. She discovered she had an interest in nutrition and so transferred to Utah State Agricultural College (now Utah State University).

After studying there for two years, she got engaged to her husband-to-be, Guy, while home for a visit during the summer break. Because he was at the University of Utah, she transferred there for her final year and finished her degree in Foods and Nutrition at the “U” just a few months after they were married.

Alexander said that when she was just a year old and Guy was about two, they were at a church meeting with their families. “His mother came over to my mother and said, ‘this son is going to marry that girl.’ And she never gave up!”

Alexander’s mother and Guy’s mother had tried setting them up in April of her junior year at college, but she wasn’t terribly impressed by him. But when they were both back home in Canada for the summer break, Guy’s mother “kept at him” to take her on a date, so he agreed to take her out just so his mother would leave him alone.

Two months after the first date, said Alexander, she had his fraternity pin, which served as her “engagement pin.”

Guy pursued a Ph.D. in Chemistry at the University of Wisconsin. At one point while they were there, they both traveled to Dayton, Ohio and worked on the Manhattan Project, which produced the first atomic weapons. She said she got to be part of the project “because I’d had a lot of chemistry.”

Alexander told a dramatic story about a day when she was carrying a tray of radioactive material to a location in the building, only to hear her name called for over the radio system. She handed the tray off to a colleague in order to respond to the call and moments later the tray exploded, fatally burning her coworker.

After earning his Ph.D., Alexander’s husband taught at the University of Utah for a year before embarking on a career as a scientist for DuPont in Ohio, where they raised their two children.

Alexander is no stranger to the difficulties of life. In addition to the challenges of moving her family many times and the demands of serving in small congregations of the Church of Jesus Christ across the United States, she lost her husband and son just five months apart. Her son’s death was very unexpected.

How did she keep going in the face of such loss? “You just do,” she says reflectively.

When asked whether she can think of anything she wanted to do but hasn’t, she shakes her head, “I was happy. I never wanted anything more than what I have.” And again she shows that she has taken her own advice.

What has changed the most in 100 years? She says without hesitation, “It’s the technology.”

“It comes just all at once, you’re there,” she says of turning 100 years old. “I try to be positive about it. You can grouse about anything you want and make everyone else feel bad. I think attitude is really important in a person’s life. And happiness – be happy.”