America’s Violinist, Jenny Oaks Baker is a Grammy Nominated, Billboard No. 1 performer and recording artist. She received her Master of Music degree from the Julliard School and her Bachelor’s Degree from the Curtis Institute of Music. Jenny has performed as a soloist at Carnegie Hall, Lincoln Center, the Library of Congress, and as a guest soloist with The National Symphony, Jerusalem Symphony, Pittsburgh Symphony, Utah Symphony, and the Mormon Tabernacle Choir. Jenny has released fourteen studio albums which have sold nearly a million copies and consistently chart on Billboard.  Music from her Grammy Nominated Album, Wish Upon a Star is featured at Disney World and Disneyland to introduce the nightly Fireworks Show. Jenny’s popular music videos can be viewed at www.youtube.com/JennyOaksBaker and for more information visit www.jennyoaksbaker.com  Jenny, her husband Matthew, and their four children (Family Four) reside in Salt Lake City, Utah.

Jenny Oaks Baker & Family Four have performed with orchestras and choirs throughout the United States including The Utah Symphony and the Millennial Choir and Orchestra. A favorite with audiences around the country, 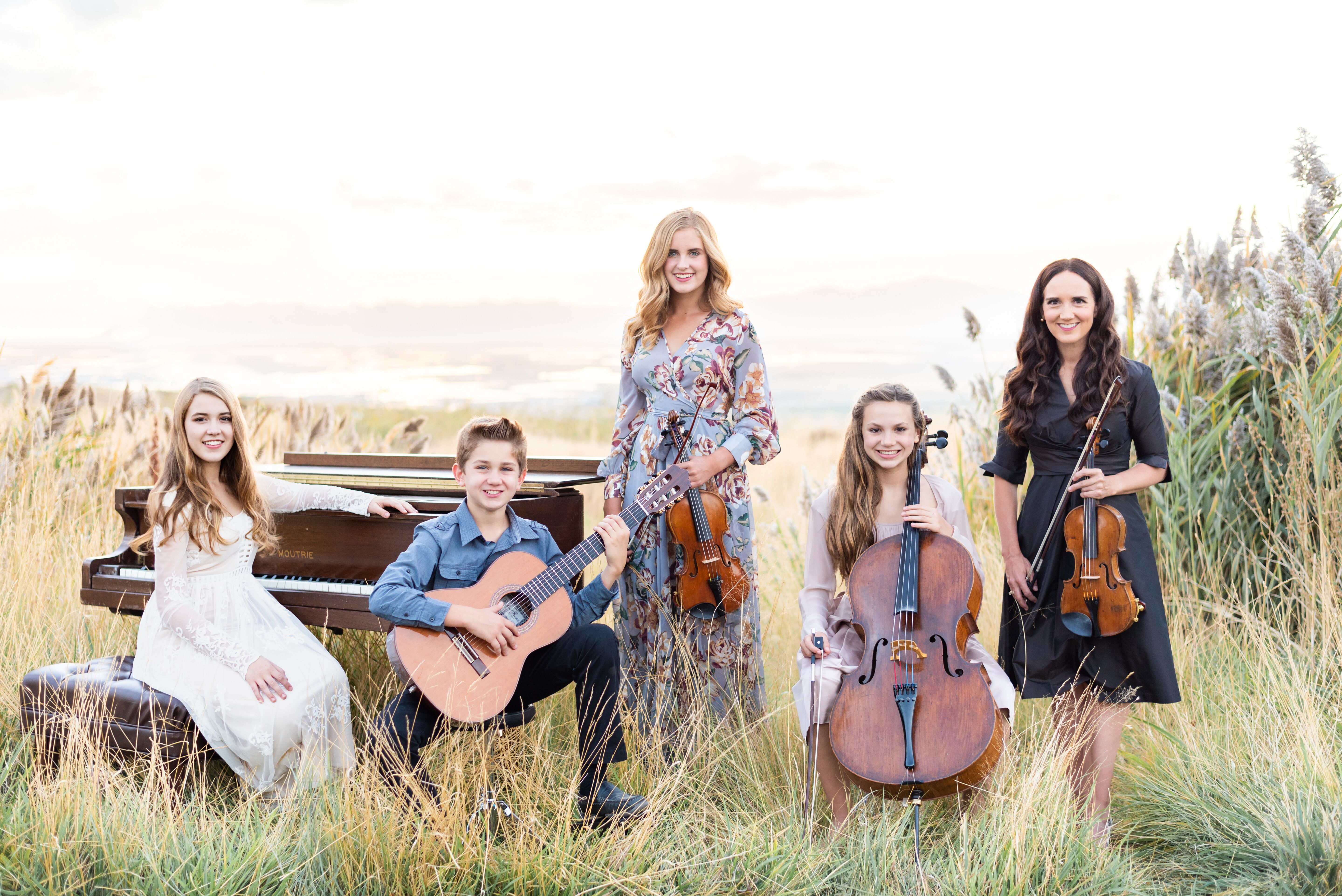 they have performed in Abravanel Hall in Salt Lake City, Stevens Performing Arts Center, and the BYU-I Center in Idaho, on the Hour of Power TV Show broadcast worldwide from California, for Ambassador’s Wives at the Congressional Club in Washington DC, for the Music Educator’s Rally at the Utah State Capital, for the Washington DC Temple Festival of Lights, for the World Congress of Families IX and at First Night On Temple Square. They have also performed the National Anthem for the Days of Forty-Seven Rodeo and Utah Jazz Basketball Games at the Vivint Smart Home Arena, for First Night at Temple Square and for BYU Women’s Conference at the Marriott Center. In 2017, Jenny Oaks Baker & Family Four performed in Vienna, Austria, and throughout Japan and Taiwan.  In 2018, they performed throughout Albania and in Athens, Greece. Family Four are also featured on many popular music videos and on Jenny Oaks Baker’s newest CD, “The Spirit of God”.

Laura is 17 and plays the violin and percussion. Hannah is 15, plays the piano and studies with Doctor Irene Peery-Fox. Sarah is 14, plays the cello and studies with Doctor Alison Wells. Matthew is 12 and plays the classical & electric guitar. He studies classical guitar with Douglas Rogers and electric guitar with Larry Green. Jenny and her children have been performing together as a family since each child started playing their instruments when they were three or four years old. Their father, Matt Baker is very musical, and enjoys being a DJ when he is not working as a Sales Executive. He also helps with all the necessary sound equipment for the Baker family, pays for lessons and is incredibly supportive of his artistic wife and children.